While not required, I’d suggest you go back and start at the beginning of this blog series if you haven’t already read the previous posts. Click here. Para español, haga clic aqui

Egypt was a kingdom of great power and influence.  As the ever increasing reach of the pharaohs included more and more land and more and more people, so did their culture.

Their desire for goods inspired the Via Maris which traversed from Memphis (modern day Cairo) through Israel (or Palestine), next to the Sea of Galilee and on through to Damascus.

From there the road would split to the north and to the east, connecting the near and far east to Turkey, and henceforth Europe, to Africa and the East. It is during the time in Egypt that the Hebrews become accustomed to a middle class living…that is until they have their world flipped on its head and they become slaves. I have often wondered why they didn’t just get up and leave.  Why would they subject themselves to the tyranny of pharaoh for over 400 years. I mean, it was really less than 100 years of growth in the idea of America as its own entity along with the taxation by the mother land, England, that lead to the American Revolution.  Why would they not revolt? Why would they not leave? Why would they allow this to happen to themselves?

When we begin to look deeper into the actual history, archaeology and writings of the time we see a different picture.  At least different than was taught to me in Sunday School.  The Hebrews were not in fact a conquered nation in Egypt.  If you will remember, Joseph of the many-colored coat variety rose to power in Egypt. Lets look at the story together. Without getting mired into too many details, just know that Genesis 37-50 tells the story how Joseph was carried into Egypt. Here is where we pick up.  We see that pharaoh has some dreams and none of his seers can translate it for him.  They call out Joseph from the prison and he not only tells the pharaoh the meaning, but also gets handed the reigns of administering the kingdom. This is approximately 1800-2000 years before Christ. This begins the approximate 430 years of the presence of the Hebrews in Egypt.  They settled in the area known as Goshen, up in the northeast part of the Nile River delta. Later that area was ruined and the town of Avaris was built over those ruins. You can see its location on this map: 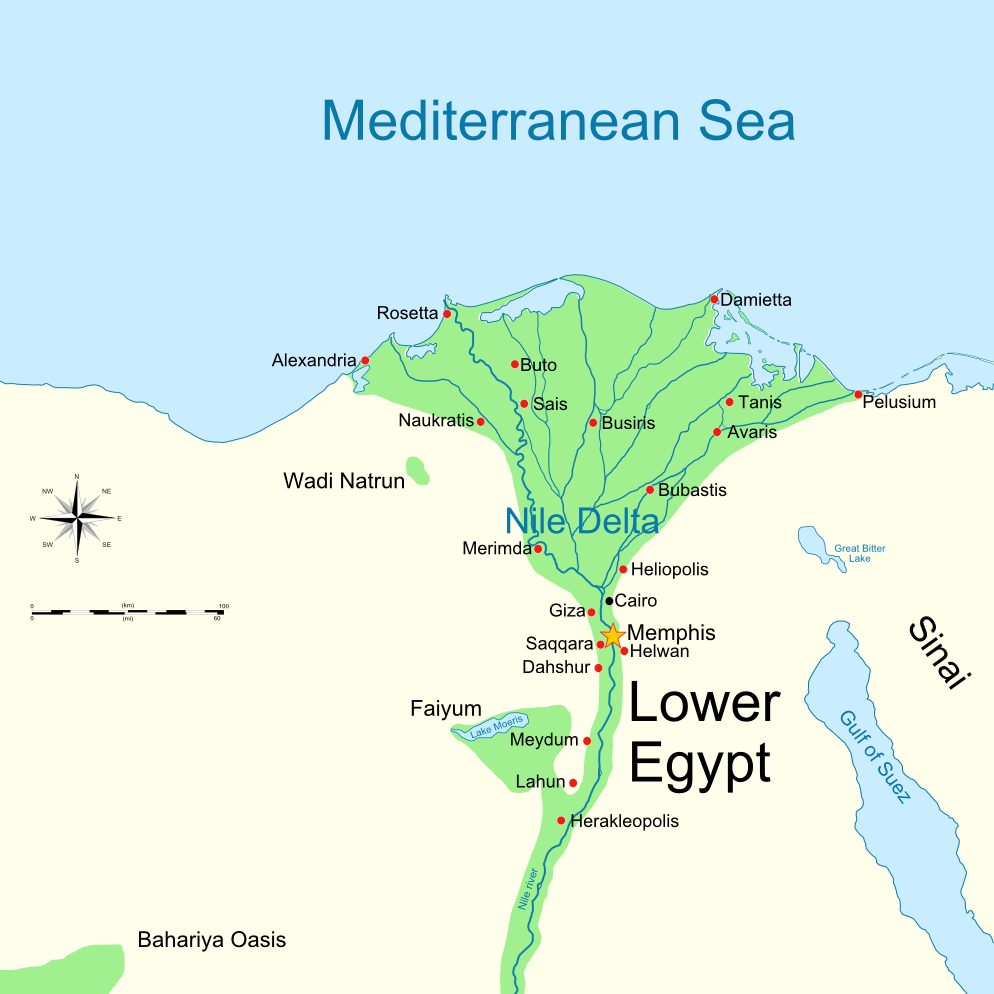 The kingdom of pharaoh was run not from Memphis (Cairo) as it was later in the history of Egypt, but rather from the southern part of Egypt in Thebes/Luxor.  You can see their location here:

This is also where you will find the Valley of the Kings and the many many tombs there.  So, as we now see, the Hebrews were working up north in the Nile River delta, hundreds of miles away from pharaoh’s direct oversight. It is during this first 200 or so years that they explode in population size, dynamically succeed in their crops and become well off financially and rather enjoy their time in Egypt.  But as Exodus 1:8-11 states, “8 Now there arose a new king over Egypt, who did not know Joseph.9 And he said to his people, “Behold, the people of Israel are too many and too mighty for us. 10 Come, let us deal shrewdly with them, lest they multiply, and, if war breaks out, they join our enemies and fight against us and escape from the land.” 11 Therefore they set taskmasters over them to afflict them with heavy burdens.” This tells us that God allowed a new ruler to take the throne who did not know Joseph.  I am pretty sure Joseph was already dead by the time this pharaoh took over, so it is not necessarily a literal “know”.  More than likely it means that he did not remember or was not told of the great efforts put forth by Joseph hundreds of years before.  And so he viewed this very large, very successful, and frankly very strong people group of the Hebrews as a threat to his kingdom. So to quell any insurrection by them and still get the production from them, he enslaved them.

No one would choose to be enslaved, that I know of.  And I think that this very sudden and very strong shift from being semi-autonomous to being enslaved caught them off guard.  And furthermore, I think they maybe even though of it being a temporary scenario…you know, under new management sort of a thing.  This may answer some of my questions.

Not only had the Hebrews set up a very comfortable life in the first half of their stay in Egypt, but they had bought in to the thoughts and beliefs of their hosts. God had already made a covenant with Abraham, and as there was no signs of the nation of Israel taking the land God had promised in the immediate future, God allowed the above events to take place.  He allowed them to get uncomfortable in their homes. This was to remind them that this was not their home. And that they had a greater home, a promised land, awaiting them.  They needed a nudge, a push, a catalyst to dislodge them from their entrenchment.  God allowed pharaoh to be used for His purposes. And the rest, as we say, is history.  Next we see Moses in the desert, with the burning bush, and God calling him into the story as well.

In what ways are we like the Hebrews in Egypt before enslavement? What might this mean for us?

Tell Me What You Thought! Cancel reply

This site uses Akismet to reduce spam. Learn how your comment data is processed.

What To Read Next?